We have been extremely busy here at Leave No Paws Behind these past few weeks. Hurricane Harvey hit Texas at the end of August and immediately, the images and video of flooding, destruction, rescue efforts, and yes, lost, displaced, and rescued pets started to come in. We knew we needed to help in any way we could.

We put our heads together to try and come up with a plan. Do we fly to Texas? Do we try to arrange a truck to bring animals to us? Do we ask someone to put a dog on a plane? We have never done anything like this before. Getting in to a hurricane affected area and trying to do something on the ground seemed counter productive. Would we be taking up resources that could be better utilized elsewhere? Would we be able to get to animals in need? We didn't want to jeopardize the amazing work that was already being done on the ground.

We have been very fortunate to meet some amazing people in animal rescue over the years. One of those people is Ric Browde, who I met 7-8 years ago at the Baldwin Park Shelter. We worked together doing bi-weekly photo and video sessions of shelter animals in an effort to get them networked and adopted. Ric now heads up an amazing non-profit organization, Wings Of Rescue. I saw a post of his mentioning he had been flying shelter animals out of the area. They were flying animals that were in the shelter BEFORE the hurricane so that locally rescued pets had a place to go to be safe, and stay local so their people could find them. I contacted him right away and asked if he was planning a flight to California, if we could help, and if he had any smaller medical needs seniors that we could take in. If so, I mentioned we could probably take in up to 10 smaller animals. He wasn't sure, as most of the animals coming out of the area had been medium to large sized dogs, but he gave us the contact information for the group that was organizing the animals for rescue, Acadiana Animal Aid. Acadiana Animal Aid is a no kill shelter in Louisiana, and at the time, the Harvey affected area had continued to grow, and that rescue was looking for ways to make room for the influx of lost and homeless pets coming in.

Toby contacted Acadiana to try and determine if they had any small seniors with or without medical needs. It turns out they did, and they were worried that no one would step up to rescue them. Well, we never had a second thought about it. We immediately stepped up and offered to take them. Tears of joy flowed. Stories of these animals were shared. A dog that had been in the shelter for 5 years. A blind kitten. Medical issues. All these animals needed some extra help. They organized everything on their end, and by the time Ric met them on the ground to organize the transport, he learned he'd be bringing us a total of 16 animals, 11 dogs and 5 cats.

Now we had the beginnings of a plan! Cathi Perez and I were going to meet the plane on the tarmac in Escondido, Ca, and pick up our newest rescues. It was a large, multi rescue operation, as Wings of Rescue transported 130 animals out of Hurricane Harvey affected areas. 85 dogs and 45 cats! Of course, for a rescue like ours, we are use to only rescuing 1 dog or cat at a time, transporting them from Los Angeles area shelters to our local vets office, normally in a small crate in the back seat of someones car. But 16 animals? We had to figure the logistics out, and fast!

Nothing is ever simple. Just as all of this planning and logistics was starting, the neighborhood where my mom lives became engulfed in a brush fire! We spent Saturday loading up the van in case we needed to evacuate, keeping the yard and roof saturated with water, watching the fire line creep closer, and pray for air support! 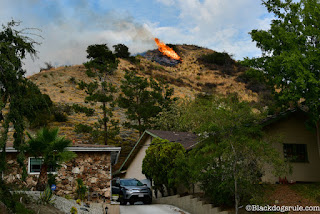 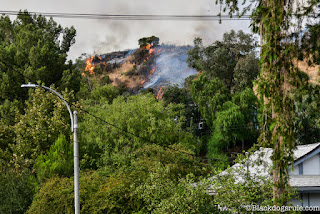 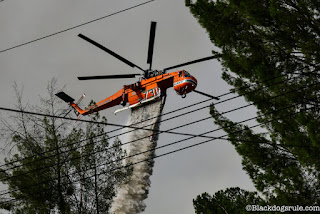 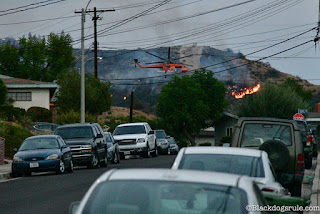 Thankfully, the air support knocked down the flames, and the neighborhood was safe by Sunday morning. Now back to planning for the Hurricane Harvey Rescue!

We placed a social media plea for crates on our Facebook page. Wings of Rescue only asked that we replace or swap out the crates we were using, as they would be flying right back to the area to organize another flight. The response to the plea was massive. We had a lot of our followers step up and offer us crates. But there had to be a better way then driving all over Southern California picking up 1 crate at a time. We were trying to get this done over Labor Day weekend, and the plane was coming in that Tuesday. With only a Sunday and a Monday to get things organized, we needed to maximize our time. In walked our newest friends, the great volunteers over at L.I.F.E. Animal Rescue. That group does one way rescue transports from countries that use dogs in the meat trade industry. As such, they had all the crates we needed, and we were able to pick them up just a couple of hours after I got an email from them.

I drive a mini van. I apparently had no idea how much space 15 crates would take up. I thought I could get them all in my van and be on my way. Boy was I sadly mistaken. We had to disassemble each crate and stack them inside each other to get them all loaded up. My truck was filled to the top! 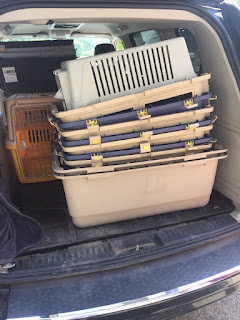 On the way home from getting the crates, Quin and I had a conversation. The plane was coming into town on a Tuesday, the day after Labor day, so Quin would be back in school. He was pretty upset because he really wanted to participate. He had spent much of his summer helping me out, going to the shelter, working with Rambo, helping on calendar shoots, and he was Shar Khan's guardian angel. My wife and I have never held the kids out f school for any reason other than illness or a medical appointment. Quin is a type 1 diabetic, so he misses school for medical appointments often, (normally just 1-2 classes). My wife and I discussed it, and we thought that this experience was a pretty valid  reason to miss school, so he joined Cathi Perez and I as part of the rescue team.

Monday (Labor Day) was spent acquiring a rental van big enough to accommodate 16 dogs and cats (it was apparent my van couldn't hold them 😂), and then loading up the van with crates, strapping them down, setting up battery powered fans to keep the animals cool, picking up some more small crates (for cats) and wire crates (to help keep the dogs cool, better air flow) from Cathi's house and trying to get a good nights sleep. 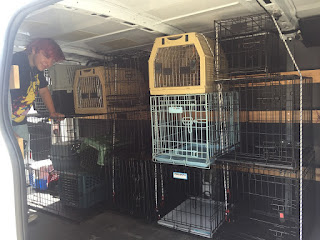 On Tuesday, the plane was expected to arrive between 12:30 and 1. We hit the road at 9am to give us plenty of time to get there and set up. We didn't hit any traffic on the way down and had plenty of time without a need to rush. We arrived about 11:30, parked the van, met the coordinator and had plenty of time to prepare. Most of our dogs were going to be smaller medical needs dogs, so everyone was instructed to not take them out of the crate to stretch their legs and go potty. We set up a massive wire crate in the van and laid down pee pads so they could stretch in safety. Cathi's experience in doing these types of rescue operations was invaluable. With her on board, we didn't miss a thing! 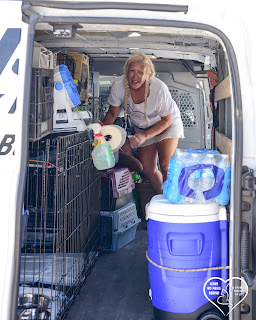 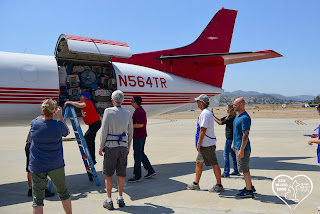 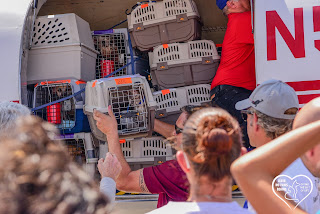 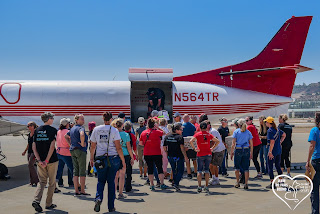 Once the plane showed up and everyone started unloading, it went extremely fast. Everyone was well organized, and each animal's crate was well marked with which rescue it was going too. Every rescue had their own designated EZ-UP where their animals would be delivered, and from there rescuers could take them out, let them go to the restroom, give them some water, and load them in their vans. It was extremely efficient, and all 130 crates were off loaded in no time. Cathi was stationed in our van, and Quin would hand her a crate, close the door (so no one could escape) and wait until Cathi signaled for the next animal. Quin would open the door, take the empty crate, hand Cathi a new crate and repeat. We were fully loaded and ready to roll out by 2pm!

We were on the road and headed to the Pet Doctors of Sherman Oaks. Initially, we thought we wouldn't make it to the vets office in time. They normally close at 6:00, but they were going to stay until 6:30 for us. The plane was on time, we were well prepared, and everything went smoothly, so we got to the Pet Doctors at 5pm!

The Pet Doctors were ready for us. They had all the kennels set up for cats and dogs, and had already begun the check in process before we arrived. They had 2 vet techs helping us unload the van and again, we were done in record time. 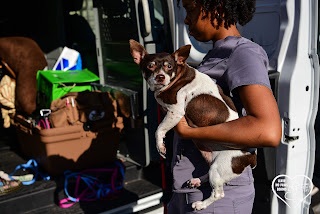 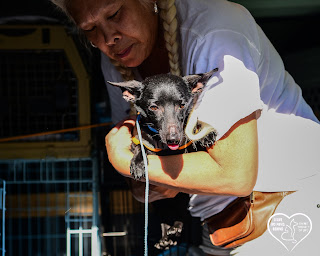 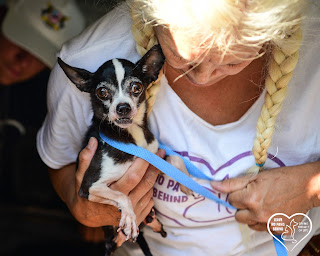 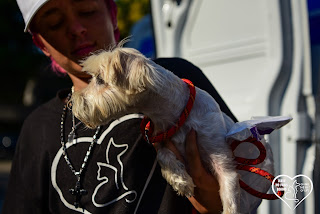 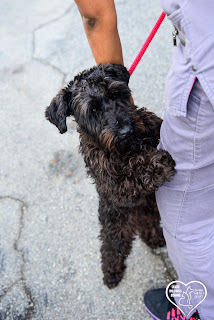 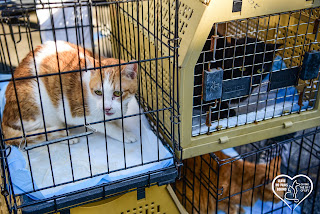 We dropped the animals off at the vet, and then we gave them a day to adjust and get checked out by the Dr's. Tests were done, and all their medical records were gone over. Then on Thursday, KTLA News, a local TV station came out and did a news story on our rescues. That story is here: Animal Rescue Saves Dogs, Cats, After Hurricane. We spent some time getting to know the dogs, taking them for walks, and learning a little about each one. 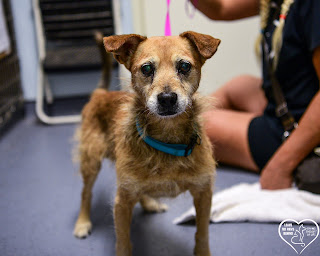 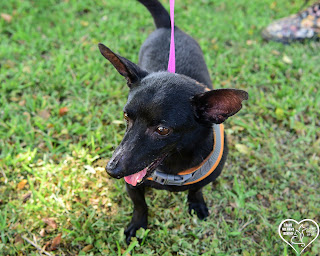 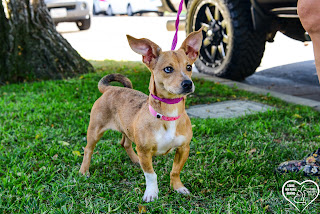 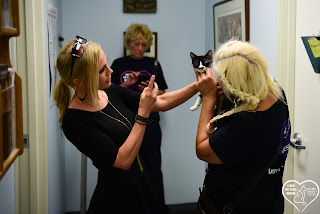 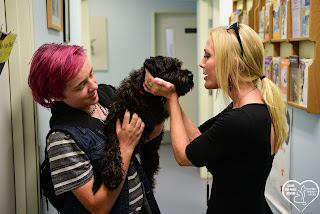 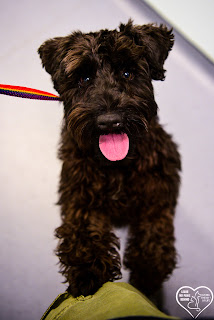 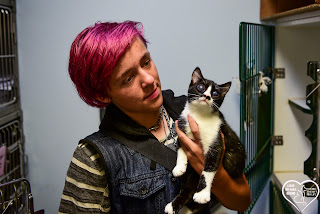 The animals are now all getting medical attention. We are learning more about their personalities. We are also looking for fosters in the Los Angeles area. If you would like to be a foster, please fill out our application here.

Some of the animals will require on-going medical care. If you would like to donate to help us continue to help them, please click here.

I can't even begin to explain what an amazing experience this was. We were able to save animals that would have been euthanized to make space. I was able to participate in a large scale, multi rescue effort to save these animals with people I respect, and I was able to do it with Quin, making this a true 3 generation operation. Toby organized all the animals, working with the rescue in Louisiana to make sure we saved seniors and medical needs, with Wings of Rescue verifying all the flight info and pick up instructions, the constant interaction and updates with the vets office, verifying foster and adoption applications, organizing the news media, and following up with donors. Quin and I got to do the easy part 😁

I would like to give a huge thank you to Cathi Perez. She is amazing. With her expertise, knowledge, dog handling skills, and prep work this whole operation went so smoothly. She was prepared and knew exactly what needed to be done and got us in and out in record time. And she kept us all in smiles! Thank you Cathi for all of your help! You are amazing!

The last few weeks have seen long days, insane hours, and hundreds of miles driven. But they have been some of the most rewarding days ever, and as we start to see these dogs and cats go to loving fosters or forever homes it will get even better! As always, thank you for all your support!
SaveSaveSaveSave