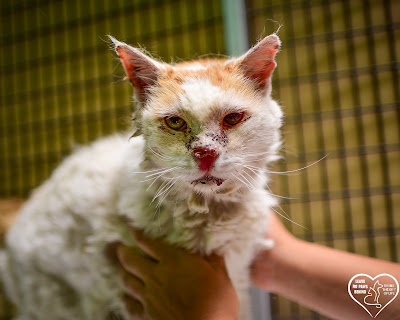 Based on his condition, Shar Khan was scheduled to be euthanized upon intake at the shelter.  He was picked up as a stray, and we think he is about 9 years old. His fur was matted into dreadlocks, he was emaciated, he had sores on his body, his ears were torn up, he had what looked like an eye infection, he is missing part of his nose, he was filthy, and who knows what was going on inside his little body.  When he got to the shelter, they found he had a microchip, and per the shelter rules, he was placed on a 10 day hold while they tried to find the owners. 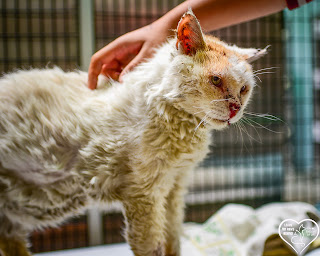 Since the shelter had to wait 10 days, they set out to find a rescue to take him, and they had no luck (they never contacted us). Because of his condition he was listed as "rescue only", and he wasn't with the rest of the adoptable cats, but hidden away in a different area. The general public didn't get a chance to see him. The shelter had no luck in securing a rescue for him. His 10 day hold was scheduled to be up on 7/29/17, and the shelter once again planned on euthanizing him that day.

Someone at the shelter finally put out a plea on Facebook, and Leave No Paws Behind was tagged in the comments. We went to go see him on 7/27/17 and we took the pictures you see above. They brought him out to us and we got to meet him in an area set aside for potential adopters. He was scared and out of sorts at first, so we let him settle. Once he started to look a little more comfortable, my son reached out to pet him. And that was it. We saw the life spark in him, and Shar Khan relished in the attention. We got that moment on video.


Once we saw this and realized the poor cat needed some love and attention, we put a CTA (commitment to adopt) on him, meaning that as soon as he was available on the 29th, we would be back for him. 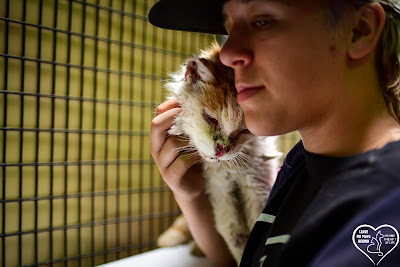 Leave No Paws Behind was there on the 29th as soon as the shelter opened so we could pick him up and rush him over to our vet's office, The Pet Doctors of Sherman Oaks. The initial report from the vet was:
RESULTS:

Early kidney disease, may improve just by eating and drinking well. We should recheck the kidney values in one month.
Mildly low albumin (blood protein) most likely secondary to early kidney disease. Recheck in one month.
Bacteria in urine - recommend add-on urine culture to ensure we gave the right antibioitics.
FeLV/FIV = negative!
Skin scraping = negative for mites
Ear cytology - showed yeast, cocci and rods, will have to start him on stronger ear medications.
Derm Duet - pending for ringworm though not suspected!
Xrays for heart murmur - No abnormalities were identified in the thorax and abdomen. Heart is normal shape and size!
Degenerative disc disease is present at the lumbosacral junction. May want to start pain medication (gabapentin) if he shows discomfort, we will monitor for this, he seems fine now. 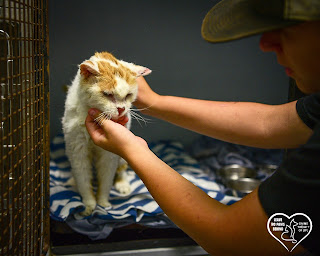 A couple of days later, after letting Shar Khan settle in and adjust, we went back to visit him. He was clean and groomed, and looking a whole lot better. We spent some time with him, and he was just purring away the whole time. 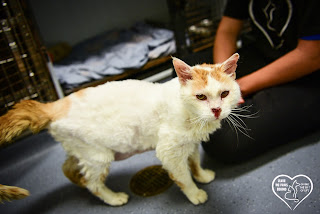 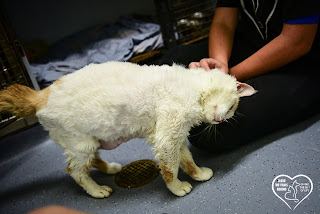 Shortly after we rescued him, the website The Dodo contacted us to do a story on him and interview toby. That great story, with more pictures is here: Shelter Cat Grateful Someone Rescued Him 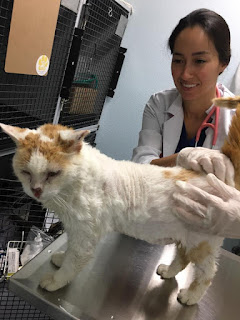 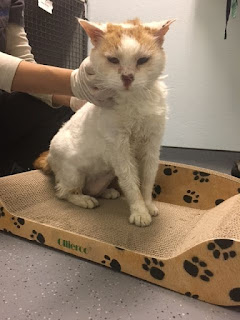 Shar Khan still has a way to go. He will be at the vets office for a few more weeks as they treat him for ringworm and some other ailments before clearing him to go home to his foster. If you would like to donate to his care, or to help us continue to help other animals in need, please go to DONATE. Every little bit helps us continue to help them. Thank you, and for more regular updates on Shar Khan and our other rescues, please go to our Facebook page.